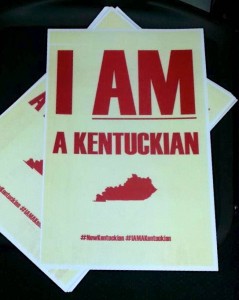 Students who attended the event held up signs like this one, provided by the ACLU of Kentucky.

The letter was distributed in the opinion section of The Courier Journal.

In it, the presidents stated: “It makes no sense for us to spend our time developing great minds that want to be here and contribute meaningfully to our culture and economy only to send them away.”

But it wasn’t only the university presidents who decided to support efforts to make public institutions more inclusive; students from these universities also gathered in Frankfort this week to show their support for pending legislation.

American Civil Liberties Union of Kentucky, ACLU, and the Kentucky Dream Coalition, KDC, chapter from U of L organized the rally at the Capitol.

Speeches by New Kentuckians were given by the three coordinators from KDC. They spoke about their experiences as undocumented citizens. Five total speeches were heard; each one declared, “I am a Kentuckian.”

The slogan “I am a Kentuckian” was sparked from Martin Luther King Jr.’s “I am a man.” The coordinators took King’s saying to transform it into an activist theme to unite all immigrant and non-immigrant Kentuckians.

The New Kentuckians are immigrants and refugees from the Kentucky community. There are over 140,000 Hispanics in the state according to the U.S. Census, a number that does not include the rest of the diverse New Kentuckian community.

Kate Miller, program coordinator for ACLU of Kentucky, said “In my opinion it was success. The group was diverse, and we had a variety of countries being represented.”

The lobbying centered on HB 396, which ultimately would allow undocumented motorists to drive legally with a certificate. Not all scheduled meetings were honored by representatives and senators. Miller said the lobbyist were able to talk to 25 to 30 legislators.

Rachel Determann, computational social science graduate student at U of L participated on Wednesday. It was her first time lobbying, and said she had the chance to meet and talk to Republican state Sen. Dan Seum and Democrat state Rep. Larry Clark. She said Clark was a supporter of the bill, but Seum was actually more reluctant to it.

Determann was born in the U.S., and she is also part of the LGBT community. “Just from a stand point of logistics, we all have things we need to fight for. We can all team up and care about each other and get something actually done,” Determann said.

The day had started with listening to first-hand accounts of living in the country without legal permission, followed by two song covers performed by Carol Kraemer, “Welcome” and “This Land Is Your Land.”

Kraemer, a Louisville native, said she is involved with the LGBT community and the immigration community. When Miller asked for her help, she jumped right in. “It’s inspiring to feel the courage and the commitment of young people who have lived in this country for so long but are not able to be full citizens. And the danger that comes from coming out as an undocumented student or person, but the commitment to that because they love Kentucky and their families.”

The bill passed out of the House Transportation Committee, and it is heading to its second hearing. Out of the 31 members of this committee, 10 are co-sponsors of the bill, including the chair and two vice chairs. 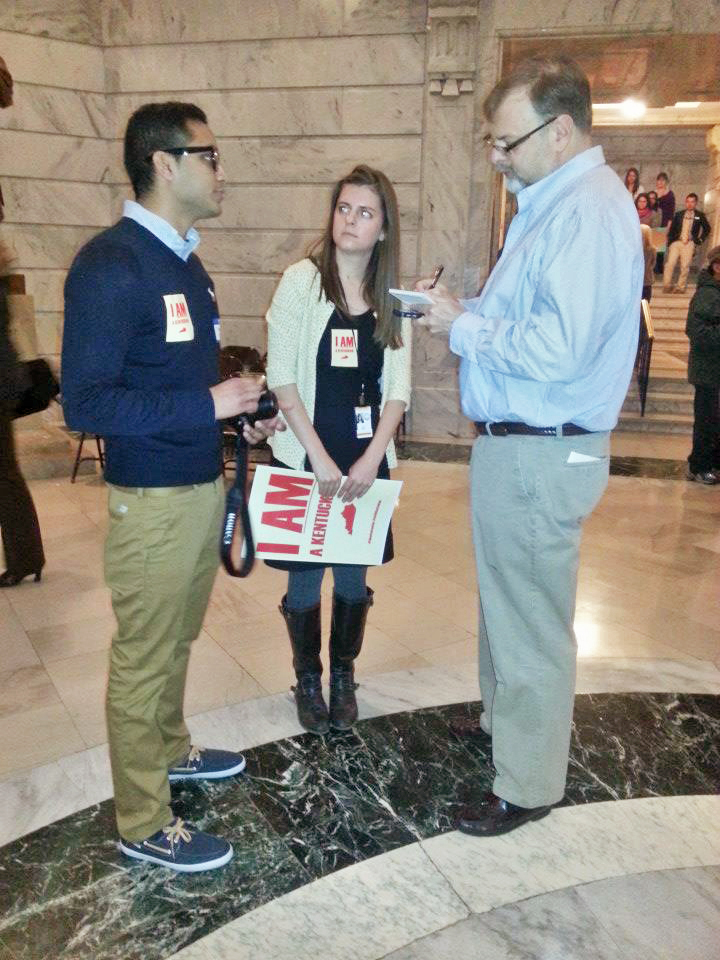 U of L student Sagar Patagundi, on left, and event organizer Kate Miller, center, in the capitol rotunda.

Kentucky may soon be one of four states that already allow undocumented immigrants to drive legally. The change is being promoted by New Kentuckians.

New Mexico, Washington, Utah and most recently Illinois, allow motorists with roadway safety training, testing and the ability to purchase insurance. The public safety policy behind the bill is calling for safer drivers which would produce safer roads.

On Wednesday, 150 new residents of the state rallied at the Capitol to promote legislation reforming its current transit laws.

Democrat state Rep. Johnny Bell proposed House Bill 396, HB 396, to allow people without a social security number to get behind the wheel legally with a driving certificate. He said that everyone was an immigrant, and that no matter where they came from, they had a voice that needed to be projected to their legislators.

“It is a basic right to be able to drive a vehicle to work to survive. It is also a public safety concern, that we need to allow people to come within the structure of the law,” said Bell.

Although the bill sounds like a triumph for the New Kentuckian community, it has its critics. Anne Caldwell, a U of L political science associate professor, said that while she understands and supports the motive, the certificate would become paradoxical. It would provide a legal document to those who are not recognized as being legally in the country.

Like the other four states, the certificate cannot be used as a valid form of identification. And there are other problems. “It is a certificate not a license, so you can identify the undocumented people from the documented people. As soon as you get stopped by a police officer, they’ll be able to tell who is undocumented,” said Silvia “Shaky” Palacios, a sophomore biology major in the ULtra program by U of L and Jefferson Community and Technical College.

States are taking the initiative the federal government has not been able to take on immigration reform. Kentucky could become the fifth state in the country to take a stand in adjusting laws to fit new community residents. Palacio said this could be a small step forward. The big change the New Kentuckians are waiting for is the immigration reform from Washington D.C.

There is a federal draft detailing a direct path to become a citizen. However, this proposal says it would take eight years to achieve full citizenship. Palacio’s and other New Kentuckians do not want to wait so long. That is why she said they will keep pushing for reforms in the state.

About the Author: Staff