Let’s pretend for a moment it isn’t completely demoralizing to both patron and cook to serve something called a “punk platter” for $9.95. In fact, let’s also pretend for a moment that punk– yeah, you know, actual NOFX-Bad-Religion-Ramones-bleeding-out-the-ears-and-dancing-on-the-ashes-of-the-establishment punk– never actually happened. Suspending this type of belief is more like lounging under the dangling Damoclean sword, but it will help me get through this review without breaking my $3.00 bottle of Shock Top on the side of their K-Mart patio furniture and stage-diving into the salsa bar in the center of this restaurant.

Taco Punk is par for course in the forced meme that is NuLu. It is stocked with polo-shirt baby boomers who can afford to be trendy, and young professionals from nearby hotels who fawn over an indulgent amount of kitsch. I kid you not, as I ate, a Porsche Carrera was parked out front.

Down the street are a number of shops and restaurants whose business models teeter on being unsustainable in Butchertown’s micro-economy. The imposition of high-end antique shops, offering recovered antebellum doorknobs for $85 in a neighborhood with 34.9 percent of residents living below poverty level, is undeniably awkward.

The moral high ground drops right out from under the floor of those overpriced restaurants that guarantee healthy meals of completely organic food, when the neighbor — for whom the only affordable meal includes high fructose corn syrup — can’t afford to eat there. The elephant in the room is whitewashed and has a sign around its neck; it reads “Gentrification.”

What’s happening in Butchertown isn’t a Metro Council-midwifed community renewal that delivers hardware stores, barber shops, Laundromats or family medical practices; its a vacuum that sucks the tax-money marrow from a historic district and spits it out into the pockets of folks who would never voluntarily live there.

Which brings us back to that sword: how long will profiteers and restaurateurs be able to scrape up the benefits of the KFC YUM! Center’s six-mile-wide Tax Increment Financing district before Butchertown’s elegant 19th century architecture is razed to the ground and replaced by an Ikea condo Fantasia?

I want to be able to say that Taco Punk is a culinary jewel that just happens to find itself in a morally dubious situation. I want to rave about East Market’s triumphant acquisition of chef Gabe Sowder of former 610 Magnolia fame. I want to talk about how Sowder’s cuisine is inspired by simple Mexico City street fare, and note the irony in the fact that he started this place with a food truck that served gourmet tacos. I want to smile right back in the face of that giant red sugar skull that grins at me from its poster without thinking about cultural appropriation, or how racist it is to turn a Dia De Los Muertos symbol into a novelty to sell tacos.

Most importantly, if I’m going to willingly participate in gentrification, I want it to taste delicious. Make me forget that I’m curb-stomping my own consumer values because I can’t turn down that soft taco mouth-gasm. That’s what I want. Whatever. People in hell want ice water.

Truth is, outside of my first – and last – visit to Highland Morning, I can’t remember the last time I paid a higher dollar-to-crap ratio for food.

Do not be fooled by the fabulous cilantro. It will not cover for the pork once it gets to your stomach.

The homemade corn tortillas were barely more than soggy crepes. They fell apart before reaching my mouth, making it even more of a struggle to enjoy the dry and tasteless pork as it fought its way down my gullet.

Seeking the assistance of the prescribed pineapple sauce, I laid a saccharine blanket of the condiment across my palate and prayed for a relief that never came.

Compelled to get my money’s worth, I dipped into the plastic ramekin of queso that apparently qualifies as a “side.”

Immediately, I was overwhelmed by a flood of road-trip nostalgia as my tongue greeted the familiar taste of gas station pump-and-squirt nacho cheese.

The trip down memory lane was abruptly interrupted when I accidentally looked at the receipt and remembered what I’d just paid for this meal.

Despite my desire to wash away the taste of disappointment, I hesitated to gulp the remainder of my Shock Top.

Instead, I considered ripping my shirt off and stuffing it into the neck of the bottle before setting it ablaze and lobbing it at the backlit neon menu above the prep counter while screaming madly “Is that punk enough for you?”

I wondered how many of the employees would run, how many would try to take me down, and how many it would take to finish me off. In the end, I scrambled away through the wrought-iron entrance gates, terrified at the prospect of enduring another minute of this smug, capitalist castle.

It was only one meal, but two weeks later I still feel like one of those pathetic sell-out Baby Boomers that goes to Hard Rock Cafe and buys a Hendrix T-shirt. Come to think of it, maybe Taco Punk could pick up a few more bucks by selling Acidez T-shirts up front.

A point of clarification: 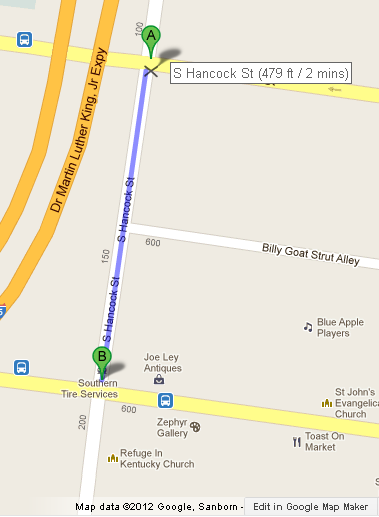 According to historian George Yater, in the Dec. 9, 1973 issue of the Courier-Journal, Butchertown’s present street system was established on April 16, 1841 at the hands of city surveyor John Tunstall, and has never included East Market. This data is also confirmed by maps provided by the Metropolitan Sewer District and the Louisville Water Company of the Louisville Metro Government for both Butchertown and Phoenix Hill.

Illustration of the street layout from John E. Kleber’s “The Encyclopedia of Louisville” (University of Press of Kentucky, 2001),

Geographically, Taco Punk is, indeed, situated in Phoenix Hill.
The Opinion piece above referred imprecisely that Taco Punk is in an area with a 34.9 percent poverty rate among the population, citing City Data. This is incorrect. 2010 US Census data shows that Phoenix Hill and Butchertown neighborhoods are combined in Census tract 59, and have a 44.1 percent rate of poverty among individuals between 18 and 64 years old.  89.2 percent of those below poverty level in Census tract 59, are in a household receiving food stamps.
[UPDATE: June 18, 2012 9:52 a.m.]

The Opinion piece above incorrectly states that Gabe Sowder once ran a food truck.

About the Author: Aaron Bacon