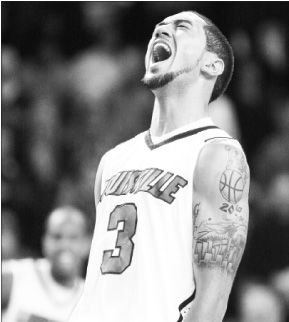 The 2011-2012 school year at the University of Louisville is sure to be spectacular in a variety of ways. In particular, U of L’s athletic programs look poised for another season of successful play in their conferences, in preparation to make an impact on the NCAA Division I sports world.

Coming off a successful first season under head coach Charlie Strong – a season that ended in victory over the University of Southern Mississippi in the Beef ‘O’ Brady’s Bowl – the U of L football team is ready to raise the bar once again. Junior running back Victor Anderson will return next season. Anderson’s performance in the Spring Game rightfully staked his claim as senior running back Bilal Powell’s successor. The talent of  quarterback recruit Teddy Bridgewater has many Cardinal fans excited for the future. Look for sophomore quarterback Will Stein, who also had a nice showing at the Spring Game, to run the Cardinals’ offense early on. The Cards open the season on Sept. 1 with a nationally televised game against the Racers of Murray State University.

The 2010 season was a historic one for the men’s soccer team. The Cardinals – led by the likes of junior forward Colin Rolfe, freshman forward Aaron Horton, freshman midfielder Dylan Mares, and junior goalkeeper Andre Boudreaux – put together a tremendous run all the way to the College Cup Finals, where they ultimately lost to the University of Akron. Rolfe, Horton, Mares and Boudreaux will all return for the 2011 season, along with a roster full of talent, to attempt another championship run. Student fans can watch the season unfold for free, as Cardinal Card student IDs allow students to attend home games at Cardinal Park with no cost for admission.

Also making a nice NCAA Tournament run in the 2010-2011 season was the women’s basketball team. The Cardinals, with key contributions from players like junior forward Monique Reid and freshman guard Shoni Schimmel, made it past Vanderbilt University and Xavier University in the first and second rounds of the NCAA Tournament. In the Sweet Sixteen, the team fell short

against Gonzaga University. The Cards’ roster is going through a few off-season changes, but with a lot of the core talent remaining intact, the team looks to remain contenders in the 2011-2012 season. As with soccer, women’s basketball games are free for students.

Finally, though the men’s basketball team may have had the 2010-2011 season end in a heartbreaker, the Cards are sure to come back with renewed vigor as one of the top teams in the nation. The Cardinals lost senior guard Preston Knowles, but return virtually every other player, including sophomore guard Peyton Siva, freshman center Gorgui Dieng, junior guard Kyle Kuric, and sophomore forward Rakeem Buckles. The Cards also add top talent from this year’s recruiting class, with commitments from guard Wayne Blackshear, forward Chane Behanan, forward Angel Nunez and center Zach Price. The men’s team will travel to Lexington this season for the rivalry matchup against highly ranked University of Kentucky, but will once again host a slew of great Big East home games in the KFC Yum! Center.