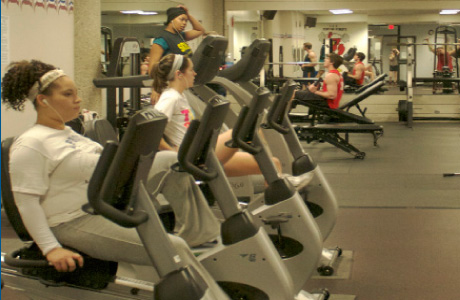 During a University of Louisville Board of Trustees meeting on April 12, members voted to approve various proposals brought by university officials and listened to presentations from the Student Government Association regarding the establishment of a new student recreation center.

SGA president Sana Abhari and executive vice president Deep Aggarwal brought a proposal to the Board of Trustees, suggesting that a new recreation center be built on the west side of the Belknap Campus, near Bettie Johnson Hall. Aggarwal said that the creation of a recreation center, located where new student housing areas are being developed, would encourage growth and help expand campus.

According to Aggarwal, the 128,000-square-foot facility would include basketball courts, a jogging track, weight rooms, a fitness lab and a multipurpose room.

“Students who participate in recreational activities tend to have higher GPAs and do better in school, overall,” said Aggarwal, a junior economics major. “The new recreation center would increase the educational and social experience that students would have at U of L.”

To cover the cost of the facility, the SGA Executive Board unanimously approved a $98 fee per semester for each full-time student, which Aggarwal claimed is a better alternative to the membership fees of other gyms around the city.

Aggarwal also pointed out that, as a result of the establishment of the new recreation center, students would no longer need to pay fees for intramural sports or fitness classes.

However, some feel that the costs to build a new recreation center would place an unnecessary financial burden on students.

“I can see the benefits of a new center, but it’s not a need,” said Ashley Jackson, a graduate student pursuing a master’s degree in anthropology. “I understand the need of getting it built, but students are all tapped out for money and it’s not fair to strain them any further.”

Abhari, a senior political science and economics double major, said that participation in intramural sports has risen in the last couple of years, prompting a need for new fields, administrative offices, and exercise and training areas – facilities that would be incorporated into the new recreation center.

The SAC currently houses the department of intramural sports, as well as a recreational fitness area.

Upon hearing the SGA proposal, U of L President James Ramsey told the board of trustees that a new recreation center would increase student involvement, consequently improving retention, which would “bring everything full circle.”

Construction of the proposed recreation center could begin as early as this year, pending approval by the Board of Trustees and by the Council on Postsecondary Education.

“This project has been the target of many fundraising initiatives to help reduce the semester fee that students would pay,” said Ramsey. “The SGA has worked closely with the university in developing a 2020 plan. Things are moving forward, but the project needs financial approval for fees and design plans.”

If approved, the facility is projected to open in the fall of 2013.