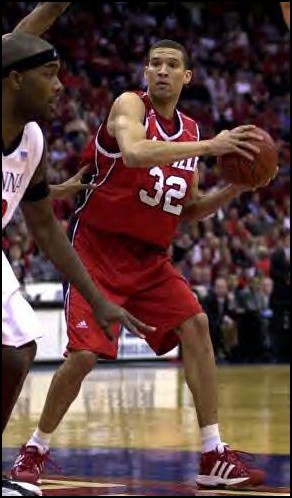 CINCINNATI-Forgive them for their misdeeds, whatever they may be. For all the wrongs they may have committed this season, Francisco Garcia and Luke Whitehead are once again the catalysts for this University of Louisville basketball team.

Even though the Cardinals suffered another ball-breaking defeat at the end of a close game- this one 64-62 loss to bitter rival Cincinnati in the quarterfinals of the Conference USA Tournament- the play of Garcia and Whitehead certainly makes the NCAA Tournament more appealing than it looked only weeks ago.

“Luke has come back. He’s feeling better, and now he’s got his confidence going,” said U of L head coach Rick Pitino. “When he’s feeling good, he does good things for us.”

Yes, Whitehead’s 12 points and eight rebounds were terrific (not to mention those five offensive rebounds). But for the most part, it was all Garcia out there. He scored on pull-up jumpers. He scored on long three’s. He drove to the basket and scored. He got steals in the backcourt and scored.

He scored a career-high 28 points. And it should have been more. After a questionable call Garcia picked up his second foul and had to leave the game with 10:02 on the clock in the first half. He’d already done some damage, getting 10 points on 4-5 shooting. Imagine if he’d played more than nine minutes.

“Under normal circumstances I let him play, but they were going at him,” said Pitino on his decision to sit Garcia for the remainder of the half. “They were doing whatever possible to get him out of there. I probably would have liked to play him more, momentum-wise.”

Pitino and the rest of America must now be completely aware of just how dependent the Cardinals are on Garcia. Nearly all the offensive fortunes rest on his thin shoulders, but Pitino seems to be fine with it.

“We are dependent (on Garcia), but he can pass his ass off,” said Pitino. “We want the ball in his hands because he can pass.”

Cincinnati also knows how deadly Garcia can be. They spent the previous day unveiling to the press their plan to stop U of L (stop Garcia, no one else can score), and took a few moments to describe playing against him.

“They run almost everything for him. Their coach does a good job of running plays for him,” said UC guard Armein Kirkland.

When the Bearcats went to a zone in the second half, it was designed to keep his players from picking up fouls from trying to guard the 6-7 forward.

“We went to it (2-3 zone) because Armein and James (White) were in foul trouble, and I wanted to keep them in the game,” said Cincinnati head coach Bob Huggins.

For all of Garcia’s theatrics, once again in the final stages of the contest the final shot didn’t come from his hands. After Kirkland hit a short jumper to put the Bearcats up 64-62, the Cardinals didn’t call a timeout and tried to set something up for Garcia at the top of the key.

“I wanted the ball in Francisco’s hands, and I couldn’t diagram the shot. Francisco wasn’t gonna get the shot, he had to pass it off to someone else,” said Pitino. “He did a good job of getting it to Taquan. We had a shot to win it, and there’s not a person in America I’d rather have shoot it than Taquan Dean.”

Dean’s shot didn’t connect as time expired, but there were no regrets about the way the play ran, according to the players.

“I just rushed it a little bit, and I faded back,” said Dean. “If I could take it again I would.”

“I know I got two guys on me, and I know I gotta look for Taquan,” Garcia said about the final play. “I’m gonna keep giving him the ball.”

The Cardinals would benefit more if they got Francisco the ball more. He shot an unbelievable 10-14 from the floor and was 5-5 from the free throw line (he also hit 3-5 shots from three-point range). But to limit him to only 14 shots is a testament to both Cincinnati’s defense (which keyed on him every moment he was in the game) and the Cardinal’s inability to free him up more.

The Cardinals need Garcia in the NCAA Tournament, perhaps even more than they needed Reece Gaines a year ago. They need him to shoot 20 times a game, especially if his shot looks even half as good as it did tonight.

“We become a camel in the desert when my man here goes out,” said Pitino. “We go into a drought.”

BRIEF: University to remain closed tomorrow due to weather