Students, faculty “take back the night” to prevent violence against women 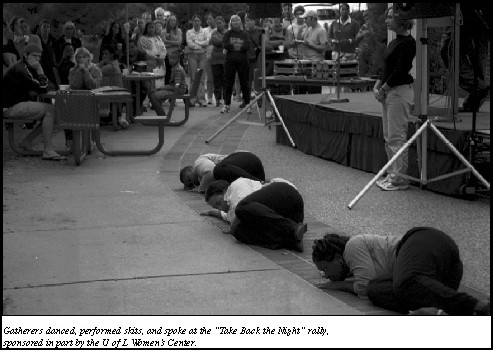 The University of Louisville’s PEACC Program, the Student Activities Board, and the Women’s Center sponsored “Take Back the Night,” a rally aimed at preventing violence against women. This rally was held on September 24 from 7 pm to 9 pm on the lawn in front of the Red Barn.

“Take Back the Night” has been an international tradition since 1976, and this year’s rally at U of L featured music from U of L’s WLCV Radio, performances by the Michael Thomas Dance and Drama Team, and keynote addresses by Kentucky politicians Joni Jenkins and Mary Lou Marzian.

The opening statement that was read by all the attendees spoke of the power in their presence at the rally itself: “We stand together in mind, body, and spirit to affirm that we have survived. Healing from violence is possible. We choose to share our pain and show our scars. Let our voices be purposeful and aimed towards justice and freedom from violence.”

The courtyard in front of the Red Barn was decorated with t-shirts made by survivors of domestic violence, which were painted, sewn, and glued with slogans such as “Love shouldn’t hurt” and “I’m afraid to go home.”

The rally that opened the event was headed up by the acting vice president for student affairs, Dr. Al Herring, who spoke of the importance of rallies such as this one. He said, “Anytime we all work to end violence against women, we work to end violence against all members of our society.” Following Herring’s speech, a group of international students read a statement in five different languages encouraging students to strike out against violence in the world: “Violence is an illness that we can all help cure. We are a family of human beings committed to peace. Let’s take back the night!”

Following the keynote address, the Take Back the Night march wound its way around campus. Participants carried candles and wore pale purple ribbons, some with knots tied in them to represent friends or family members who had suffered from domestic and sexual violence. Herring described this march as a means to “symbolize liberating our streets from violence against women. We all have the right to be free from violence.”

Junior history major and Arts and Sciences vice-president Sean Deskins enjoyed the rally and supported its cause. “I feel that this is a wonderful time for us to be together to support the women in our community.”